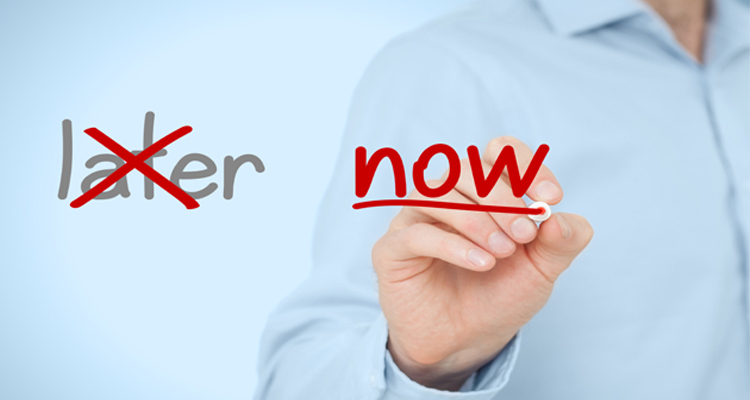 The real reason for your procrastination. It’s easy to dream things up, come up with brilliant ideas, and set goals in the beginning. It can be a thrilling high, followed by a rush of motivating creativity. But that highly charged inspiration rarely lasts. Procrastination can strike us all, but it hits some harder than others.

It always starts small. You feel burned out, so you’re just going to sleep on it or give yourself a little break in order to help jog your inspiration. Then it turns into reminding yourself that you have plenty of time to work on your goals. Eventually, however, you fall out of practice and it simply becomes easier to put it off than to work on it. This can happen to students, to creative artists, but also to budding entrepreneurs.

When Procrastination Comes from Perfectionism

It might surprise you if you’ve often written your procrastination off as laziness, but procrastination is more often caused by perfectionism than anything else. And when you think about it, this makes all the sense in the world. For a perfectionist, it’s not enough to do something. You have to do it right. If you’re particularly ambitious, you have to do it in a way that stands out more than any similar venture. It puts a lot of pressure on your shoulders, and it can often over-complicate the goal that you want to accomplish in your mind.

Perfectionists typically procrastinate by deciding that they don’t want to try to pursue their goals until they’re ready to do it right. They want it to be the right time in their life and they want to have the right skills. After all, if they can’t do it right, why bother doing it at all? This is a noble mindset, but it’s not particularly practical. If you wait for the stars to align, you’ll be waiting for too long to accomplish anything.

Perfectionism can be a useful tool for your work: it can make you more detail-oriented and quality-focused. 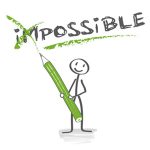 But when perfectionism isn’t checked, it can also make you fearful. It can lead to fear of failure or fear of other people’s opinions. That fear is often the driving force that causes you to procrastinate. So open yourself up to the chance that your work might not be perfect at first, but that you can make it better as it goes on. After all, the best way of improving is by doing.

When Procrastination Comes From Doubt

Sometimes it’s not a sense of rigid perfectionism that causes you to procrastinate. Sometimes, it’s a nagging sense of doubt. It can make working uneasy: every time you begin, you find yourself wondering if it’s even worth it. You wonder if you’re on the right track, or if you’ll ever meet success. Sometimes you even find yourself wondering what meeting success in your endeavors would mean. It can be overwhelming, and often it’s easier to just put the work aside and not think about it for a time.

Everyone who strives for anything experiences doubts at some point. It’s natural. You may doubt your skills or doubt your readiness. You may worry that the stars just won’t align for you or that no one out there is looking for what you have to offer. Most of the time, you can accept doubt and take the risk anyway, when it’s something you really want. However, if doubt holds you back from working, your concerns are sure to be a self-fulfilling prophecy. The less you work, the further you are from your goals, and the more you’ll truly seem to be on the wrong path.

Doubt can come from two main places. On one hand, you might feel strongly about what you’re trying to do, but you don’t feel confident in yourself. If that’s the case, surround yourself with people who can build you up and take steps to encourage yourself to keep trying. On the other hand, doubt might be trying to tell you something about your work. If you just consistently don’t feel right about what you’re doing, that may be a voice you need to listen to. What doesn’t feel right about it? Is any of it salvageable or are you on the wrong path altogether? Sometimes doubt can be a wise warning, but it’s important to know the difference between natural doubt and actual discomfort with your pursuits.

How to Beat Procrastination

Procrastination doesn’t mean that you’re lazy or untalented. Often, procrastination comes because of a strong desire to do the job well, or because you’re not certain if the pursuit is right for you. But whatever the reason, procrastination is as good as poison to your success, so it’s good to be able to recognize it and to know how to beat procrastination.

Track your routine. When you sit down to work, place a blank sheet of paper next to you. Put down the time that you start working. Any time you feel the urge to check your social media or play a game, but the time for that down on the paper as well. Or maybe you don’t want to go into so many specifics. Instead, mark a tally every time you pull yourself away from work. At the end of the day, you’ll still be able to see how often you let yourself pull away from your work. Taking the time to tally it will also give you a chance to think about your procrastination and reconsider.

Enlist accountability partners. Ask your friends to nag you. Even a once-daily, “So how’s your project going?” may be enough reminder that you have others counting on you. If you’re procrastinating because you feel overwhelmed or pressured, this step might backfire. Otherwise, peer pressure can be a useful motivation tool.

Give yourself a tighter deadline. Some people need a ticking clock in order to feel motivated to get to work. If that’s you, and you feel your official deadline is a bit lenient, commit to doing it sooner. Put it down in your planner a week before it’s due. Set alarms on your phone. Do whatever you can to make it feel urgent. 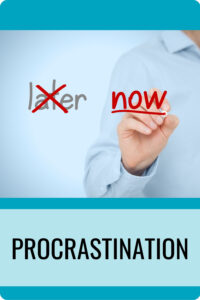 Forgive your mistakes. Perfectionism is great in theory, but as we’ve seen, it can choke you in actuality. The best favor you can do for your productivity is to allow yourself to make mistakes and not beat yourself up about them. Rather than deciding that mistakes are a devastating failure, see them as an opportunity to learn and improve. Forgive yourself, and promise to do better in the future.